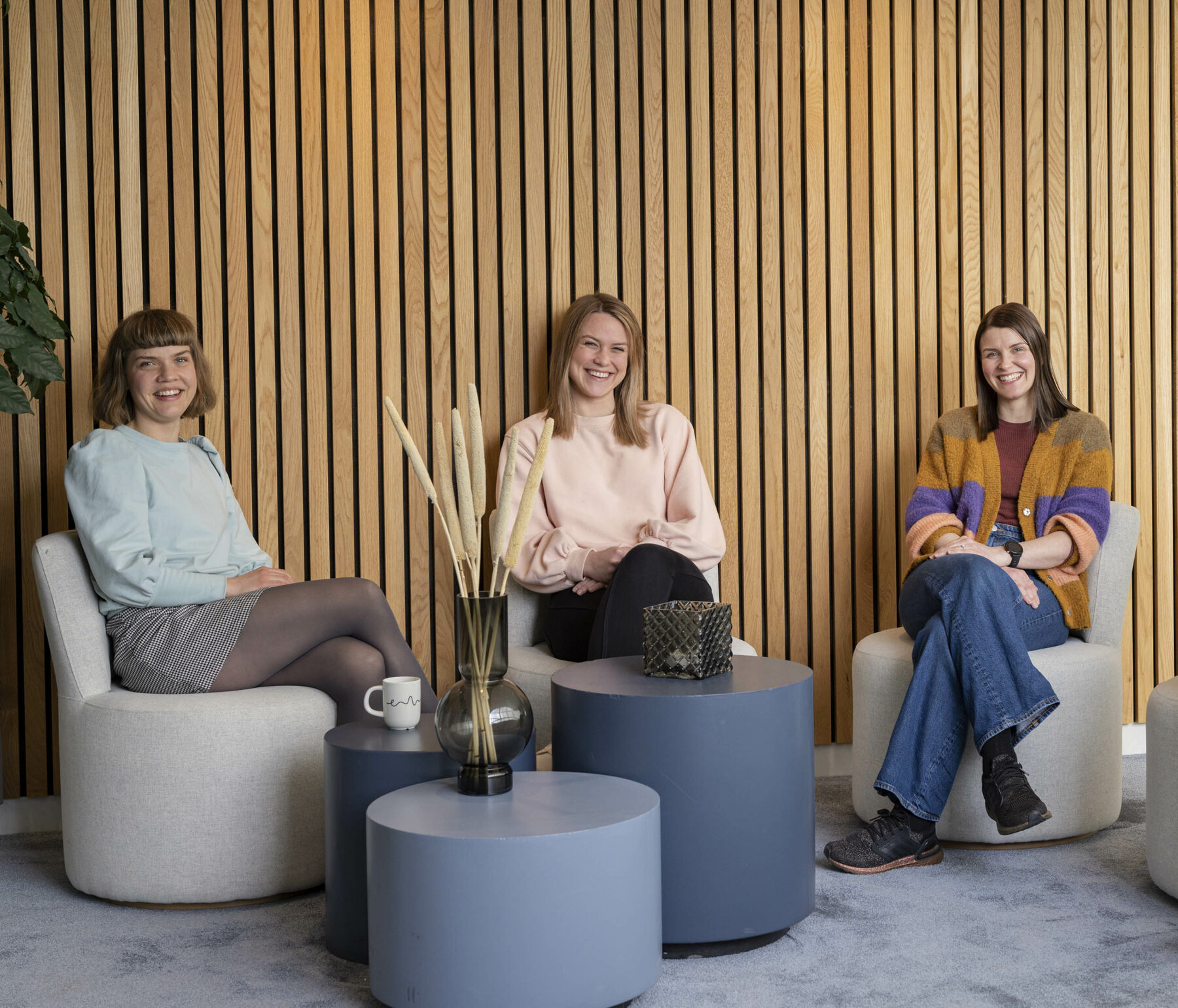 ‘Just remember to always take a seat for yourself at the table, because you can do this without pushing anyone else down. That’s the way forward!‘

Karen planned to only spend one year studying maths, until she got hooked. Now she has a PhD and an ambition to save the powergrid.

‘After my first year I didn’t feel completely finished with maths, so I applied to study further at the University of Copenhagen. I thought it might be quite nerdy….and it was….in the best possible way.

Karen’s passion for maths only became stronger over the years, and while her fellow students aimed to pursue specific professions, she was keen to dig deeper into the subject.

‘A lot of my fellow students had a clear plan for what they were going to use their education for, and then you had people like me who were just like ‘maths is cool’. I was interested in the basic research at a level that pushed towards the limits of philosophy.

After finishing her PhD, Karen realised that she had to start looking for a job. After undertaking a couple of courses within technology, the door opened into the IT-business world and she began working for a local IT company in Rogaland, Norway.

However, a large proportion of the customer base was from the oil industry, something she had mixed feelings about.

‘I am an idealist, and felt it was difficult to wake up in the morning knowing I was working in the oil industry when in reality I’d really like to work within the green technology sector.’

The she came across a job advertisement at Easee, a company she had heard positive things about from a friend. She ended up applying for that job and today leads the way in finding better ways to control energy.

‘The goal is for energy management to be easy for everyone to use while saving them money. It also goes hand in hand with Easee’s overall goal of developing the power grid of the future.

On International Women’s Day, she has a clear appeal for young girls.

‘Remember that the social rules you are in the process of learning now will help you build important social competence that you will need both privately and in working life. Just remember to always take a seat for yourself at the table, because you can do this without pushing anyone else down. That’s the way forward!’

Caroline began her career by developing a charger for Formula-1 cars, before she moved on to work for Jaguar. Today she still develops chargers, and luckily she decided to park at Easee.

‘At school I was always good at science, but not sure what I wanted to do with it. At the same time, I’ve always been keen to open as many doors as possible, and since I like to travel, I wanted the opportunity to work in other countries.

She chose to pursue a degree in mechanical engineering, specialising in renewable energy, which gave her skills and opportunities to work all over the world. Her first stop after university was at Formula 1, where she worked for Lotus in Oxfordshire.

‘This was the 2014 season, when hybrids came into the picture. I designed the ‘glorified socket’ that was used to charge the car battery before the race.’

Caroline also casually mentions that she has 3D printed a Formula-1 car.

‘You start with a concept sketch, then make a 3D model, before you finally print the product. In Formula 1, everything needs to be as compact as possible, so we 3D printed a full-size car to be able to test and optimise all the parts to ensure maximum performance.

She eventually switched and started to work for Jaguar/Land Rover, where the workplace changed, together with the development process.

‘I worked on developing a dashboard where we could start by drawing sketches in the office, and then follow the product until we were in launch phase in the factory.’

Caroline eventually felt the urge to move back to Norway. Once again she was unsure of what she wanted to do for work, except for one thing: it definitely couldn’t be in the oil industry.

‘I came across the job advertisement at Easee, where the job description was a combination of all the things I had loved in my previous roles. It was a dream come true!’

She believes it’s important to use International Women’s Day to talk about the fact that there is still a gap between women and men, and to make young girls realise that they can work in technology. Or anywhere they want for that matter!

‘It’s still the case that young girls who are good at science still get pushed towards the health service, while boys are encouraged to pursue engineering subjects. That makes absolutely no sense to me!’

As a child growing up in Greece, Effie enjoyed taking apart remote controls to better understand how they work. Naturally this early love for technology led her to pursue a degree in Electronic and Software Engineering, and a Masters in Telecoms & Networks.

‘I’ve always loved science and math, but I also loved language as a means to express yourself, debate and influence. So I chose to study engineering which I describe as science and innovation with a purpose.’

After completing her studies, Effie quickly turned her passion into a career in telecommunications and innovative business solutions.

Now, at Easee, she gets to combine her love of technology with a purpose with her other love: sustainability.

‘As an early EV driver, I’ve always felt that EV chargers are more than just a plug on the wall. So to see Easee creating an ambitious product that was more in line with what I felt EV charging should be about was incredibly exciting!

Together with the strong cultural focus that was noticeable even before starting, Effie was inspired to join the company and now leads the UK team as Country Director.

‘I am passionate about technology, but not just for the sake of it; I want to create technology that can change our world for the better. So to work in a company with such an ambitious drive to shape the future of electricity is an absolute dream come true.’

Working in a traditionally male environment doesn’t come without it’s challenges, and on International Women’s Day, Effie has a strong message for girls wanting to pursue a career in the tech industry.

‘Just follow your gut. Even if there were gender and other labels once upon a time, there have already been myriads of brilliant female examples to bust any myths and stereotypes, so there is nothing to prove, apart from being true to yourself.‘